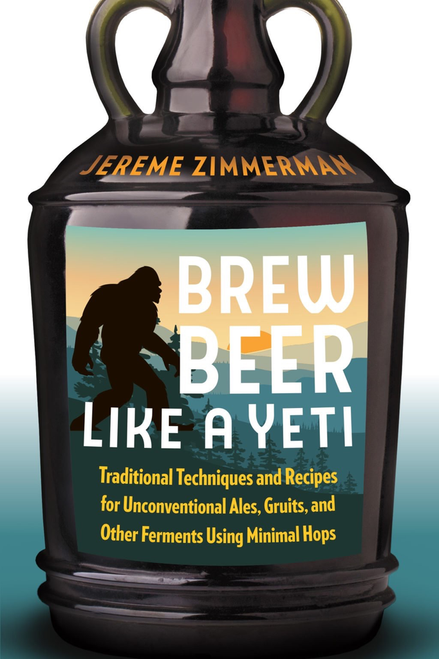 Experimentation, mystery, resourcefulness, and above all, fun—these are the hallmarks of brewing beer like a Yeti.

Since the craft beer and homebrewing boom of the late twentieth and early twenty-first centuries, beer lovers have enjoyed drinking and brewing a vast array of beer styles. However, most are brewed to accentuate a single ingredient—hops—and few contain the myriad herbs and spices that were standard in beer and gruit recipes from medieval times back to ancient people’s discovery that grain could be malted and fermented into beer.

Like his first book, Make Mead Like a Viking, Jereme Zimmerman’s Brew Beer Like a Yeti returns to ancient practices and ingredients and brings storytelling, mysticism, and folklore back to the brewing process, including a broad range of ales, gruits, bragots, and other styles that have undeservingly taken a backseat to the IPA. Recipes inspired by traditions around the globe include sahti, gotlandsdricka, oak bark and mushroom ale, wassail, pawpaw wheat, chicha de muko, and even Neolithic “stone” beers.

More importantly, under the guidance of  “the world’s only peace-loving, green-living Appalachian Yeti Viking,” readers will learn about the many ways to go beyond the pale ale, utilizing alternatives to standard grains, hops, and commercial yeasts to defy the strictures of style and design their own brews.

The Herbalist’s Way: The Art and Practice of Healing with Plant Medicines by Nancy & Michael Phillips

Farming the Woods: An Integrated Permaculture Approach to Growing Food and Medicinals in Temperate Forests by Ken Mudge and Steve Gabriel

Farm to Table by Darryl Benjamin and Lyndon Virkler

Will Bonsall’s Essential Guide to Radical, Self-Reliant Gardening by Will Bonsall

The Lean Farm by Ben Hartman